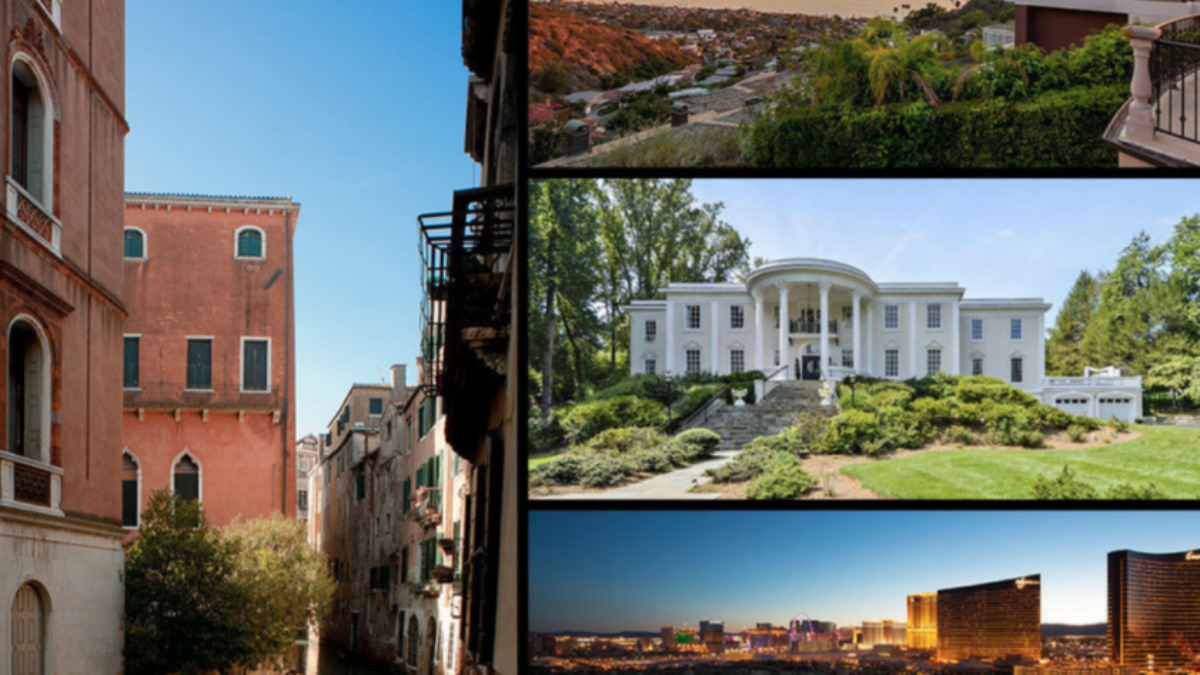 This fall, a White House look-alike in Virginia, an opulent Las Vegas penthouse, a contemporary Venetian palazzo and a Laguna Beach ocean view estate will be among the properties that go up for auction and are sold to the highest bidder.

Once associated with unloading distressed properties, today, real estate auctions are also used to sell luxury listings that are instead in good standing and often totally paid off, experts say.

The scope of property auctions has certainly expanded in recent years, but are there certain types of properties where an auction might be a preferable way to make a sale? That depends on where the property is located and the auction is held; what the motivations are to make the sale; and how accepting the seller is of the terms that come along with this high-risk process. 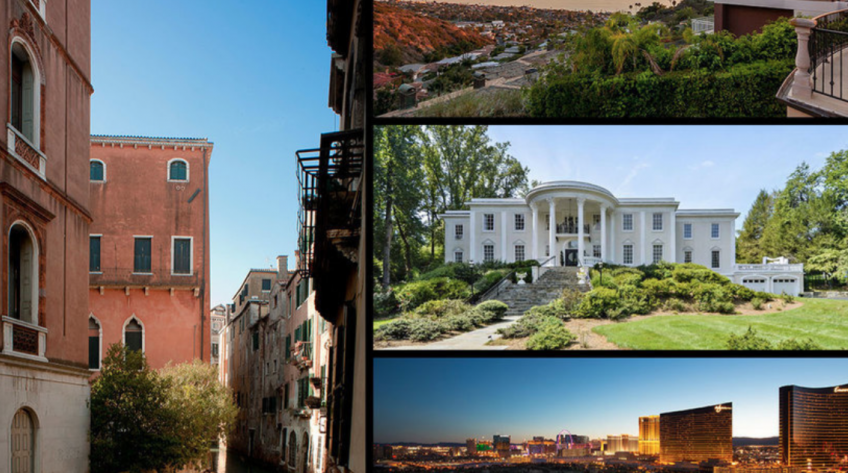 When it comes to location, Australia stands out as one place where public auctions have long been the way that the vast majority of properties in cities like Sydney and Melbourne—and their surrounding suburbs—are sold.

“Auctions are seen as the fairest and best method of sale, where everything is out in the open and transparent, and the market really dictates the price,” said Peter Baldwin, the chief auctioneer at Richardson & Wrench, an Australian real estate network based in Sydney.

In his 27 years in the business, Mr. Baldwin said he’s auctioned off more than 35,000 properties—each sold in approximately seven to 15 minutes—and is currently seeing unprecedented clearance rates of about 85 percent due to the severe lack of inventory.

“Even with more and more foreign buyers, we like this idea that you have to show up and compete for the property,” Mr. Baldwin said, noting that most properties are available for buyers to have a look for about a month before the auction date, and listed with a reserve—or lowest acceptable—price. Neighborhood properties are typically grouped together and auctioned off on the same night in an auction hall, but there is some flexibility to hold a private auction for pre-registered, pre-qualified buyers, especially for high end properties above the A$20 million mark or so.

It’s only when a property doesn’t sell during an auction that it goes to the open market and is listed with a sales price, as is typically done in the United States and other luxury real estate hubs like London and Paris. “Here, if a property doesn’t go to auction,” Mr. Baldwin said, “the buyers start questioning its integrity.”

Because the price of top-tier properties is often dictated by unique features, like a waterfront location, a massive size or panoramic views, there’s often a much smaller potential buyer pool than there is for the standard luxury property, Mr. Jacobs said. And within this narrower market, a huge divide often exists between what the most interested buyer and the second most interested buyer is willing to pay for it. In these cases, a more traditional route of sale might make the most sense, because it allows time for buyers—some of whom weren’t even looking until the perfect property for them appeared—to materialize, and for the seller to get the best offer.

In the rest of the world, particularly in the luxury property market, the story is almost completely flipped from what’s common in Australia. Almost every property in other luxury markets is listed by a realtor and put on the open market with a specific price attached.

While that’s not changing anytime soon, auctions do have a role in selling non-distressed luxury properties, said Laura Brady, founder and president of Manhattan-based Concierge Auctions. One of those times is when a property has spent a good period of time on the market without any real traction, Ms. Brady said. This is because an auction can add some intrigue and draw interest from potential buyers, just as other tools, like a super high listing price, starchitect designer or over-the-top amenities, can.

“When a property has spent prolonged days on market,” Ms. Brady said, “we may be the seller’s best option, and the best way to maximize value for them.”

Another time that a luxury auction might make sense is when a property is at the height of their individual market, whether that’s Telluride, Colorado, or Knoxville, Tennessee. An auction offers a way for buyers to forget about local competition and see the property for what it is.

A third time—and this is a growing segment, said Ms. Brady and others in the field—is when a property is in a hot market and has never been listed. Keeping that Australian model in mind, “an auction is a way to get interested buyers to reach their actual top price,” Ms. Brady said, “and a way to gather interested people and make them compete against each other so that the seller achieves their goals on the timeline that they want.”

Last year, she said, about 15 percent of properties that Concierge brought to auction were of this type. Scott King, a fourth-generation real estate auctioneer and the president and CEO of Tranzon, LLC, a national real estate auction company based in Portland, Maine, said this type of seller represents about 25 percent of his auctions, a percentage that is only growing.

In all three of these scenarios, auction companies stress that they’re incredibly selective when deciding which properties to represent. Not only does the property itself have to be exceptional, desirable and move-in ready, but it also has to be in an A+ location—preferably a scenic vacation destination, like Hawaii or Aspen or Jackson Hole, Wyoming—or somewhere that attracts wealthy buyers, like Greenwich, Connecticut or the wealthy New York City suburbs. It also has to be in the right neighborhood within that location and be represented by an agreeable listing agent that understands and is amenable to how the auction process works.

But most important of all is the seller, said Trayor Lesnock, the president and CEO of Miami-based Platinum Luxury Auctions. “We allow natural market competition to do its thing,” he said, which might mean setting a reserve of $2 million on a property worth $5 million and seeing what happens. “Our strength is making buyers thinking that they’re going to get a great deal,” he continued, and in order for that to happen, the seller has to understand the process and be willing to cede some control over the price to gain more control of the timeline.

“If the reserve is too high or the terms aren’t right,” Mr. Lesnock said, “the auction won’t be successful.”

Here’s a look at other news from around the world compiled by Mansion Global:

Thanks in part to its consistent ranking as Australia’s most livable city, Melbourne has seen the nation’s highest median increase this year, with an 8.2% year-over-year price hike as of June, more than twice the growth seen in Sydney. And while prices are lower in Melbourne than Sydney at the moment, the city is seeing steady population growth, with an estimated increase of 1.8% per year, which means prices are likely to rise over the next few years—and investors would do well to get into the market now. (Elders Real Estate)

Over The Past 10 Years, These Australian Suburbs Have Doubled in Value

New numbers from CoreLogic show that nine South Australian suburbs have seen a 100% jump in property values over the last decade, compared to a nationwide median house price jump of 51%, and 44% for unit prices. College Park had the largest jump with 233% growth, followed by Eschunga at 202%; Heathfield at 137%; St Peters at 110%; North Adelaide at 109%; and Forestville at 106%. Stepney, Hazelwood Park, and Mylor all saw values double, as well. “The next time you hear of property prices doubling every seven to 10 years, although it can happen in certain areas, there are no guarantees,” said CoreLogic researcher Cameron Kusher.
(News.com.au)

As more Chinese cities take measures to cool down their overheated real estate markets, the eastern city of Jinan is now requiring buyers to prove their marital status in order to qualify. (Rumors of this kind of policy also led Chinese buyers to rush to obtain divorces in recent weeks.) The measure is meant to prevent couples from owning multiple homes, but has fueled frustration among buyers, as other recent regulations have made it hard for Jinan residents to actually obtain a “single status certificate.” As of now, real estate experts in the area say they’re “uncertain” when the problem will be resolved. (Reuters)

Tamara Mellon, the British-born Jimmy Choo brand co-founder who’s currently relaunching her eponymous shoe line, has snapped up a nearly 4,000-square-foot Greenwich Village apartment for $18.35 million, just over the $18 million asking price. But apparently she didn’t need to sell her old place to buy a new one: Ms. Mellon’s Upper East Side penthouse is on the market for $25 million, down from its original listing price of $27 million. It’s also available to rent. (New York Post)

Miami’s Brisk Rental Market Shows No Signs of Slowing Down

Miami-Dade County is set to see a record number of new rentals on the market this year, with 3,000 already opened so far in 2016 and many more expected to enter the market by December. But thanks in large part to a prohibitively expensive sales market, demand for rentals is still outpacing all that new supply, with the second quarter vacancy rate dropping 1.4% year-over-year, and rents rising 2.2% in that same period. However, 11,000 condos are in the pipeline for the area over the next two years, and a number of those could become rentals, which may put a damper on the market’s gangbusters growth. (The Real Deal Miami)

Well-off residents of coastal cities in the U.S. are looking to bolster their investment portfolios by purchasing rental properties in cheaper markets out-of-state, a process being made easier by a growing number of new startups, such as HomeUnion, Investability, and Roofstock, that are geared toward facilitating such investment. Most of these buyers are looking at homes between $50,000 and $150,000 located in markets with modest sales prices but relatively strong rents, such as suburban Atlanta, where the landlord of a single-family home can expect an average 25.8% gross annual yield. “In the last 12 months, I’ve seen more cash buyers from California than I’ve ever seen in my career, and I’ve been doing this for 25 years,” said one Cleveland real estate agent. The setup isn’t without its risks, though, as most of these startups are relatively new, and ask a 7% to 10% cut of the profits, even as rents are starting to cool off in cities across the country. (Reuters)

Before New Regulations Kick in, Housing Starts Spike Across Canada

Ahead of new federal regulations aimed at slowing the nation’s out-of-control market growth, September housing starts in Canada rose at their fastest pace all year, jumping 20% from August. (An economic indicator, housing starts reflect the number of privately owned houses that have begun construction in a given period of time.) Single-family starts in urban regions rose by 15%, with a 22% rise in multi-unit projects. The only area that didn’t see growth in housing starts was Ontario, but with starts across the board coming in higher than any economists had anticipated, an official from the Bank of Montreal wrote that this pace of growth “could grow more worrisome in the year ahead given that the current pace of new construction, if sustained, would likely leave excess supply on the market.” (Bloomberg)

The original Mansion Global article can be found here: http://www.mansionglobal.com/articles/42883-luxury-property-auctions-a-thriving-avenue-for-sales-globally